We visited library branch number 48 out of the 72 LAPL branches this week. Felipe De Neve Branch Library is in the Hollywood/Westlake/Rampart Village/Koreatown neighborhood near the Lafayette Recreation Center and the Wi Spa. MacArthur Park is close by. The branch is named after the fourth governor of Las Californias, Felipe de Neve, who is considered the founder of Los Angeles.

They had so many great books out on display! 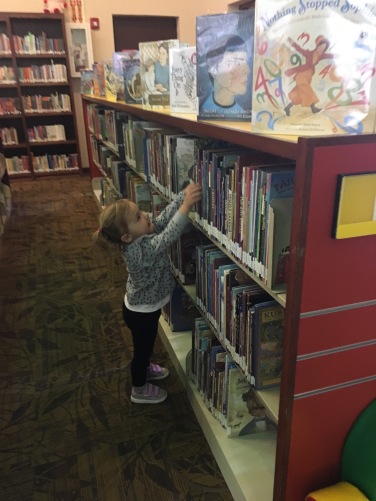 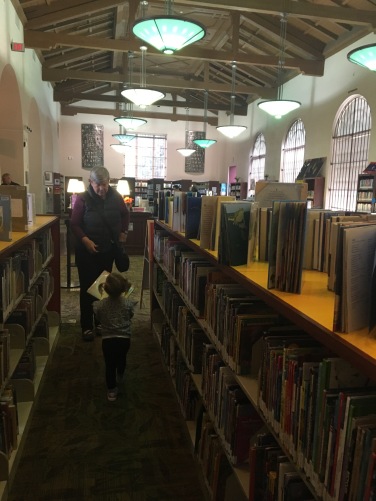 G, Riley and I spent some time in the children’s section. 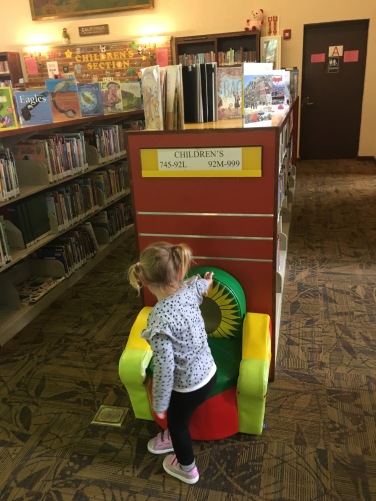 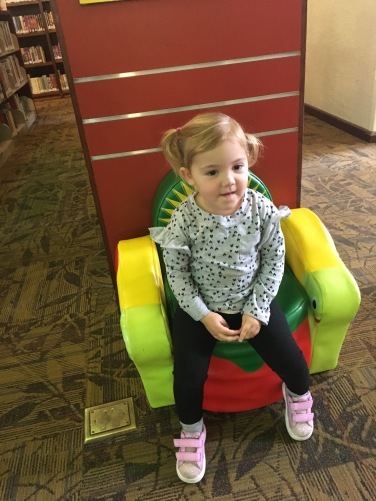 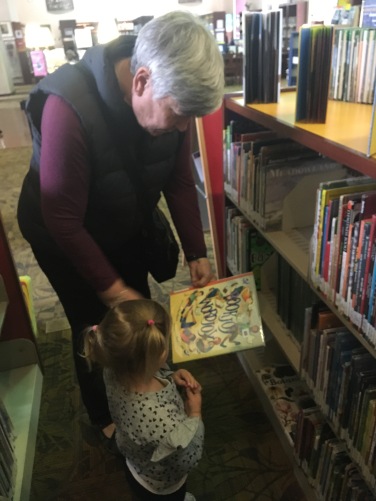 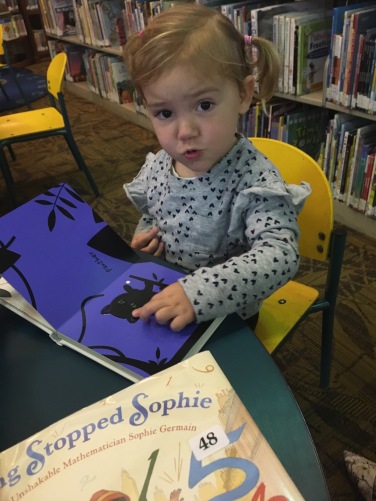 We got lots of books, as always. 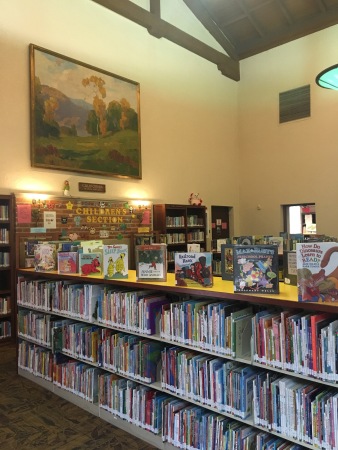 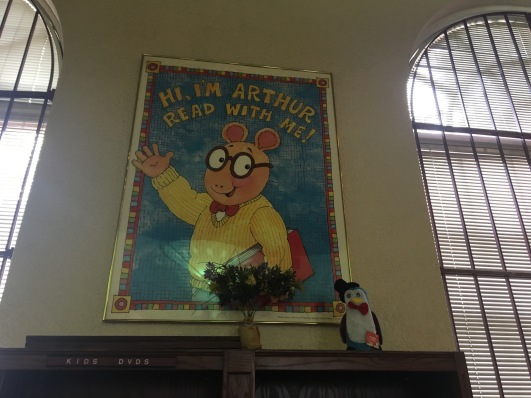 Riley took home (but did not want to be in any pictures with):

The board book Hello, Baby Animals – A High Contrast Book with art by Julissa Mora; 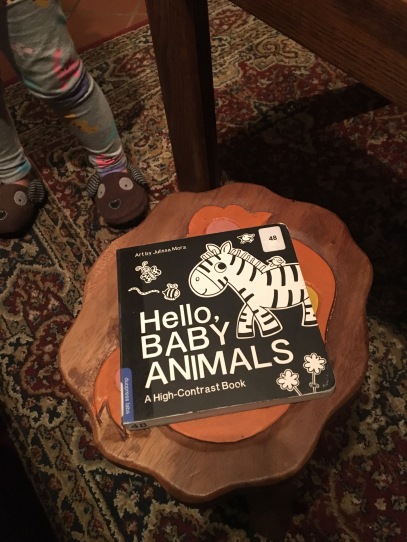 The board book Jungle Animals by Xavier Deneux; 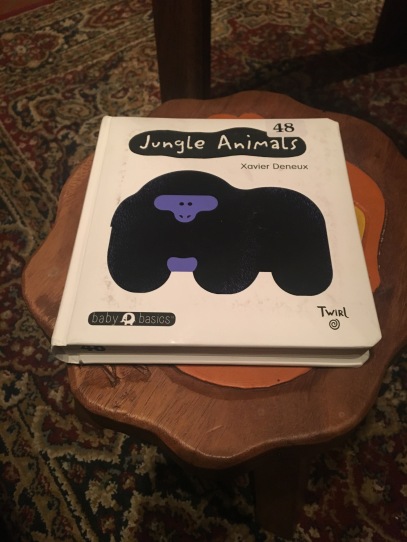 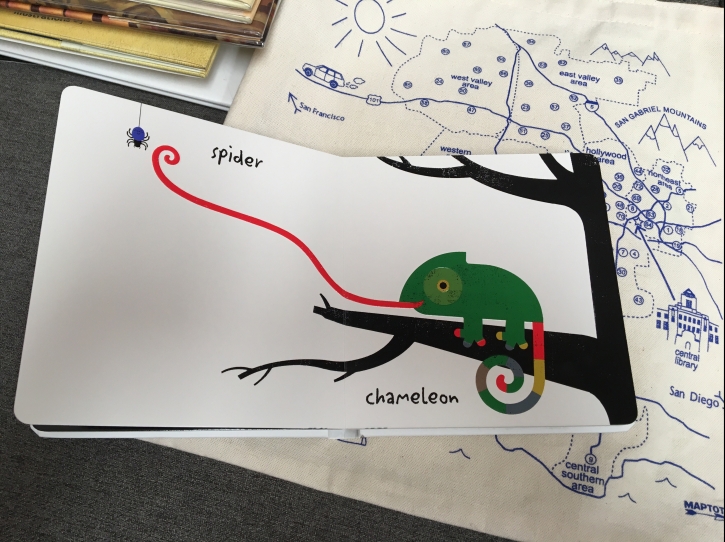 Nothing Stopped Sophie – The Story of Unshakable Mathematician Sophie Germain written by Cheryl Bardoe and illustrated by Barbara McClintock; 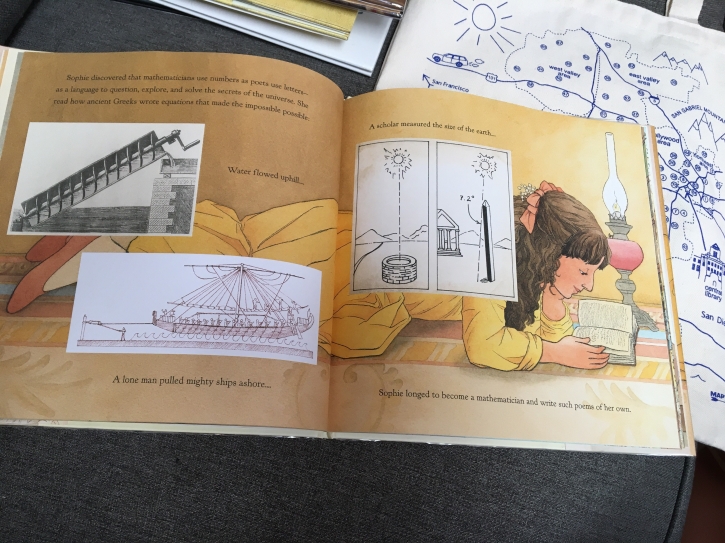 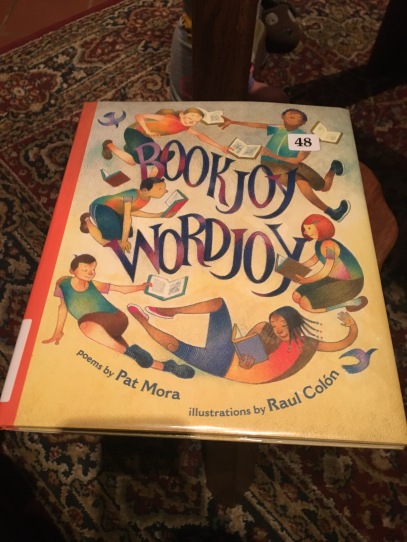 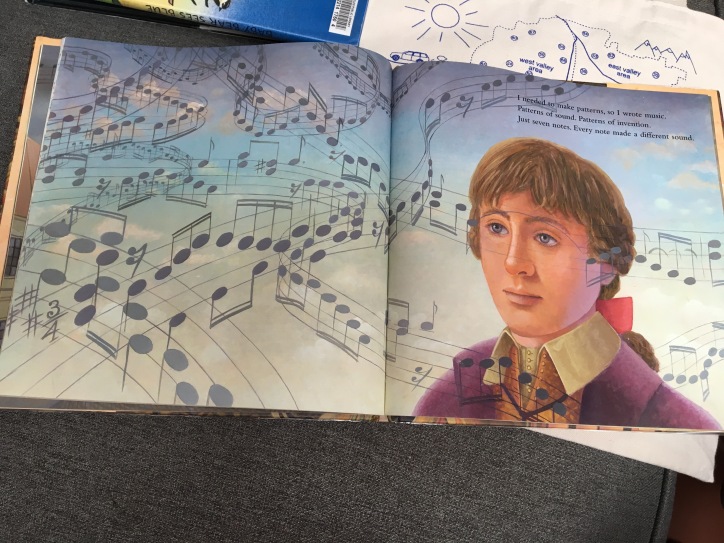 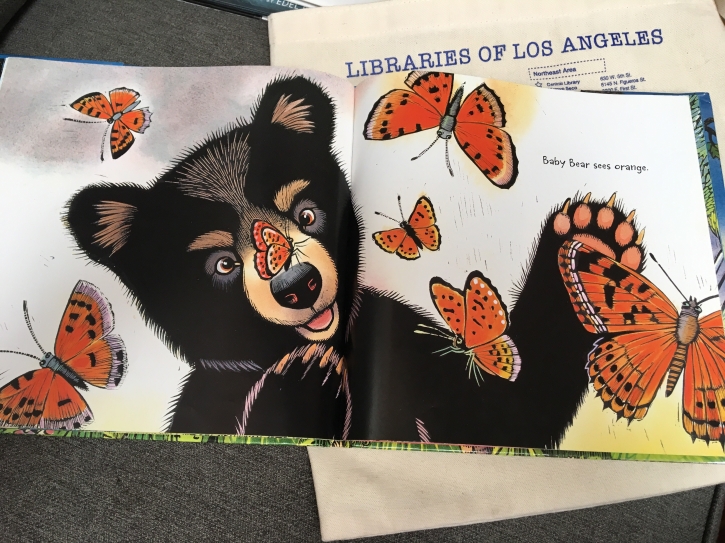 Fascinating – The Life of Leonard Nimoy by Richard Michelson, illustrated by Edel Rodriguez;

Our Very Own Dog by Amanda McCardie, illustrated by Salvatore Rubbino; 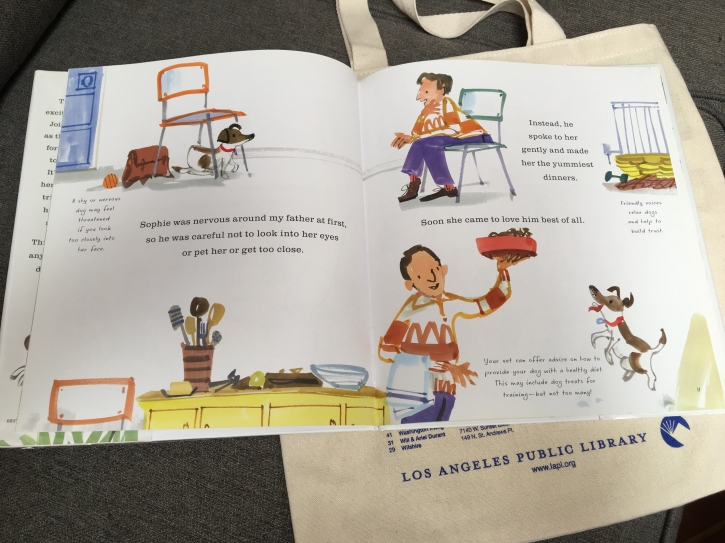 7 Ate 9 The Untold Story written by Tara Lazar and illustrated by Ross MacDonald.

We enjoyed every book we read together in the library, and at home. Riley is even pretending to put me to bed and read me a book during playtime. . .

Here’s to being thankful for Los Angeles Public Libraries! Next time you’re near the Felipe De Neve Branch Library, stop in and read a book. Join in for Family Storytime on Tuesdays at 4:15pm and then head to Central Library for the DTLA Maker Faire on December 1, 2018! 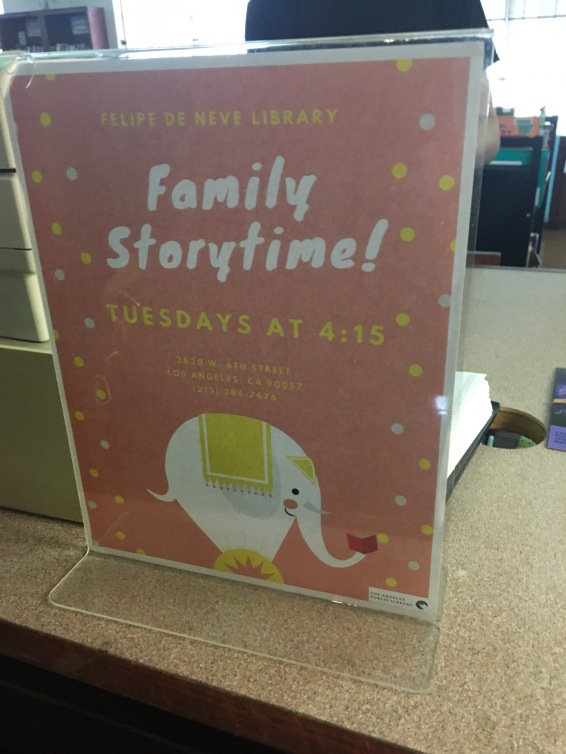 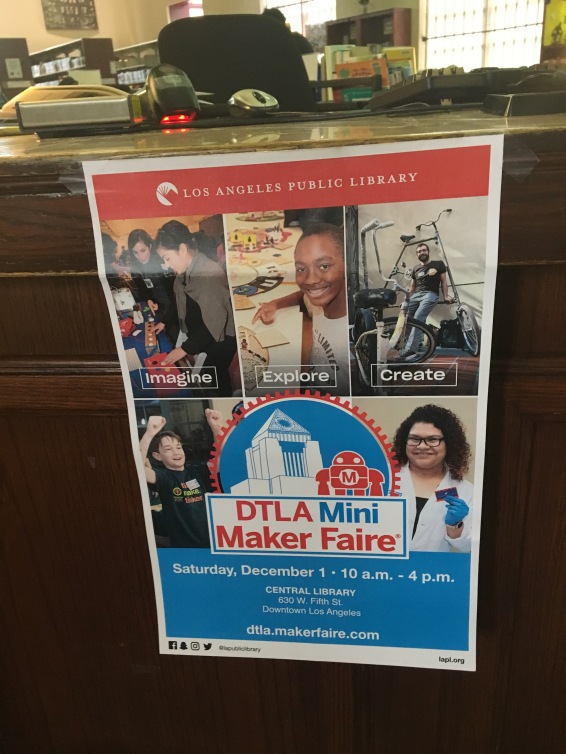 Also, check out the November 2018 edition of L.A. Parent and read about Mike Sonksen’s Park Project -starting on page 32 where he even mentions our library journey at the end of his article on page 34! Here’s to exploring Los Angeles in adventurous ways – in parks, or libraries . . .or any other way you can imagine in the amazing city we live in. 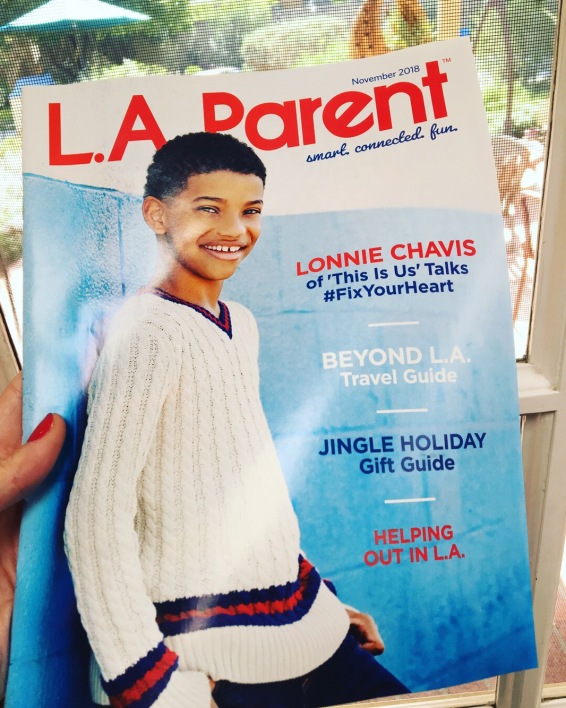 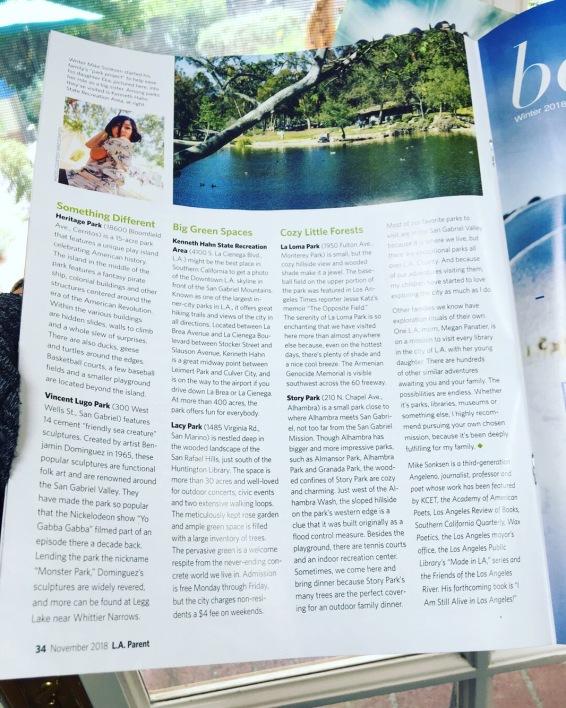 I'm used to writing short tweets, so this blogging business of actual sentences is going to be a challenge. I'm starting this blog as kind of a diary of my visits to the library with my daughter. I wanted a way to explore Los Angeles with her, and a way to explore the best thing on the planet. Books. Children's books, more precisely. There are so many books out there and I can't keep up. At least at the library, I can check out a few and not get overwhelmed. It's a starting point. I needed a plan. So the plan is to go to all 72 branches over the next few months. . . years? I don't know how long it will take, and I'm not in a hurry. Join us on our journey! Megan Panatier (and daughter Riley) March 2017 View all posts by publiclibraryjourney